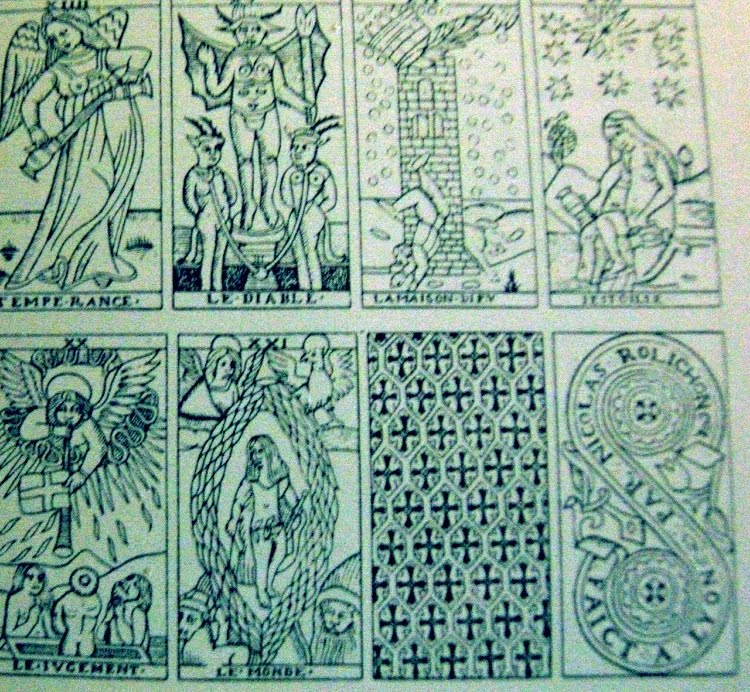 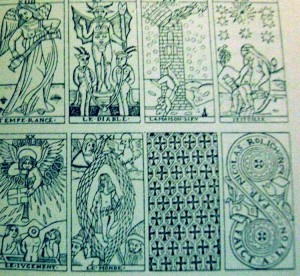 The image is commented as follow in Jean-Marie Lhôte‘s book (here translated):

Tarots by Nicolas Rolichon, Lyon, XVIIth century. This deck is only known through these 24 cards reproductions, published in the dictionnaire “Larousse mensuel” dictionary in july 1919. It belongs to the Tarot de Marseille pattern. It is of great interest since the first known examples of this pattern date only from the early XVIIIe siècle. (note : J.-M. Lhôte here excludes Noblet tarot from the “type 2” pattern as it had been described by Thierry Depaulis in the 1980s)

One can find online references to a Nicolas Rolichon in the city of Lyon at the end of the XVIth century and early XVIIth century on the IPCS website, but in that case this is a standard Dauphiné/Piedmont pattern cardmaker.

Thanks to scholars on the tarothistory forum, here are some lights about this discovery by Jean-Marie Lhôte and some experts opionions about it.

First and really important : Ross G. Caldwell found a reproduction from the Larousse mensuel july 1919(1) (here are the direct links to the 5 images : 1 2 3 4 5 ) and several references to cardmakers named “Nicolas Rolichon” or “Rolichon” in Lyon and around. He also inform us about a communication between Jean-Marie Lhôte and Thierry Depaulis : the original sadly seems to be completely lost, and the Larousse source is still unknown (update from march 2014 : T.Depaulis published recently a highly probable mention of this deck in his papers “tarot de Marseille facts and fallacies” in “The Playing Cards”) ; both researchers don’t think the Nicolas Rolichon from around 1600 can possibly be considered the author of this deck, the date being extremely early, and believe it to be from the late XVIIth century, at least post-1635 which would nonetheless make it one of the earliest “Tarots de Lyon using the so-called de Marseille pattern”.

Charly Alverda points out the presence of several reproductions of this deck in Le Tarot du point de croix, a stitching and cartomancy (!) book, although a few pictures are indeed present, they are alas in black and white and appear to be reproduction badly taken from the Larousse dictionary.

Robert Mealing found interesting corespondances between Nicolas Rolichon and Jean Dodal decks, and wonders which one of the two is really the earliest, noting that some details let him think Dodal is the oldest.

update from march 2014 : there is more to read about this deck in Thierry Depaulis article mentionned above, “Tarot de Marseille facts and fallacies”, published in “The Playing-Card” volume 42 n°1 & 2, and (maybe, as I seem to remember but don’t have the book handy) in his recent book “Le Tarot révélé” publoshed at the occasion of the tarot exhibition in the Musée Suisse du Jeu.

notes:
(1) a paper by Henry Decharbogne