The Pierre Madénié tarot deck (recently published by Yves Reynaud and available through his website Tarot de Marseille Héritage) presents a peculiar caracteristic that can be found on several blockprinted decks : “ghost” images from certain cards lines appearing reversed on other cards.

They can be seen for instance on the Popess (III) and the Knight of Deniers : 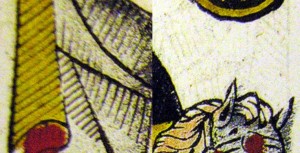 The Popess is on the left, on the right the reflected lines can be seen quite clearly, the horse can be seen on the popess, those who own the deck can check it)

In a similar way, only more obvious, the Queen of Batons and the Bateleur (I). 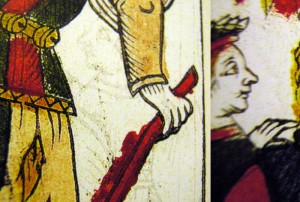 The two pictures above show the Fool and the Lover (VI) : between his body and his arm, the Fool hosts the rightmost character from the Lover card, while behing his head can be seen the rays from the Lover little cupid. 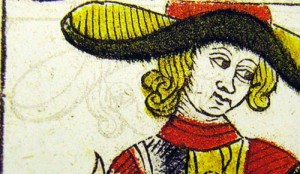 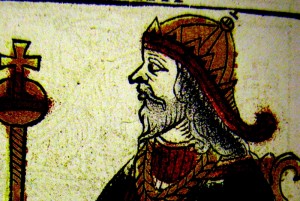 Certain cards even reflect themselves : so is with the Knight of Bâtons, the Emperor (IV) and (not illustrated here) the Knight of Swords.(note that the contrasts have been enhanced to make the lines more obvious, so they don’t do justice to the reproduction quality).
By watching closely the deck, many other examples can be discovered, sometimes with slight shifts, where two cards and the gap between them appear on another one.

But how did those line arrived there ? Why only the lines and not the colours ?
This is logically explainable by the 17th century cardmakers methodology.

What are the valid hypothesis ? Were already printed sheets of paper recycled on the other side ?
We can safely infirm this hypothesis : the papers qualities and the conservation of said qualities were one of the cardmakers main concerns ; they would not have reused an used sheet for printing the faces, mostly because the process of printing the sheets would have modified the paper and made it unusable for a second run, and because you don’t print on any side of a sheet. Moreover it is doubltful that the paper would have been transparent enough to permit such a detailled image.

In fact the lines appear because of a know phenomenon which has been document by Duhamel du Monceau : in french in the cardmaker slang, “les cartes ont baisé”, which can be translated to “the cards kissed” (altough the word baiser may also be understand in a less courtoise manner).


I could experience this technical problem when making my Triomphes de Paris, but without some of the 17th century cardmakers constraints I took the liberty to insert a blank protection sheet between two faces, this illustrates quite clearly the “baise” : 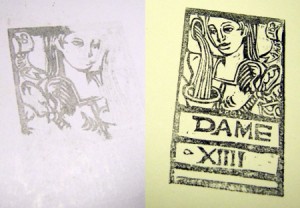 In the exemple above, we can notice that an overglued area (the glue is behind but nonetheless its moisture affects the other side of the sheet) leaves a clearly more accentuated reversed print.

In this second example, the counter-print is more homogenous and less marked.

The “kissing” (to keep a less orgiac translation) of the cards happens just after glueing the cards when they are put under the press. The “dressing” (habillage – appying the colours with stencils) is made on the glued cards, that’s why the mirror images are not coloured.
The preparation of the sheets is well described by Duhamel du Monceau, organizing the sheets in a certain order improves the execution, and having a face facing another face while a back faces a back enables to keep the back clean.

Duhamel du Monceau explains the counter printing or “baiser” to an over inking of the molds, but another parameters comes in account : the moisture from the glue. When glueing of the paper happens, the ink on the printed sheets has dried without this “kiss”, but the moisture that comes with the glue “awake” the ink which then is partially printed on the facing sheet.

Why didn’t the cardmaker place another sheet of paper between two faces ? This is a thought that comes to mind with a modern vision of the production ; but paper was expensive, adding sheets to a stack would have added an important weight (which makes a difference when you have to handle thousands of sheets in a day), slowed down the operations, plus a cheap paper would present many faulty qualities, such as mineral matter and irregularities which would have affected the cards, etc… that’s why it must have been cheaper and more productive to take care to the inking and glueing, the “baisées” cards being acceptable (as we can see they were painted anyway).

What do we learn from those marks in the end ? Not much since “l’Art du Cartier” by Duhamel du Monceau explains this printing artifact which is confirmed by the experiment. It can nonetheless be noted that those marks give a few indications about the molds composition : for instance it appears that the Emperor and Knight of Bâtons and Epees from this deck were rather centered on their respective rows, since they face their own once the sheets were stacked.
Some shifts also indicates the pile of papers were not strictly aligned (but quite precisely nonetheless).

We can nowadays be very grateful to Monsieur Duhamel du Monceau for his precise description of the cardmakers work in the late 17th century (NB : although his book was published in the 18th century, Thierry Depaulis note that it describes more the late 17th methodologies) and for the transmission of their poetic and peculiar jargon : in the intimacy of the press, stuck to each other in the moisture from the glue, the cards baisent, just before being habillées (dressed up) ! Maybe “baise” should be translated by a less gentle word.

Edit : to be honest and less kinky, as I posted in the comments below, the term most probably refers to lipstick traces from a kiss rather than more intimate activities, although the double-entendre cannot be completely discarded.

2 thoughts on “Ghost images : the kiss of the cards”