My latest project is a serie of big trumps  (about 9x18cm) called « Les Triomphes ». The engravings are now completed and the first preordered decks are in the making.

Its basic structure is modeled after a tarot trumps serie with influences – among other things – from XVIIth century tarot decks, although this is a completely original creation and in no way a servile reproduction – so not everything will match your usual tarot trumps serie – for the better.

The deck is fully handmade, each card is studied, designed, engraved and printed with many care, magically overcharging the cards through both the symbolism making process. The serie is not yet achieved, but preorders will be available soon.

The complete serie may also be available later as a handmade print collection in a portfolio.

Each engraving is a little bigger than 9x18cm, the cards will be around 12x21cm.

Even though the structure is loosely based upon the Parisian anonymous and Vieville’s tarot pattern, with a bit of so called “Marseille tarot” pattern influence, I decided to work in a rather bigger size,  like the oldest Italian painted tarot decks, in order to add even more creativity and personal inventions in it. Relying on my thorough study of the tarot which started decades ago and other experimentations and investigations in the divination and “mystico-spiritual” fields, the cards are slowly and precisely drawn and elaborated to infuse a maximum invisible in them. 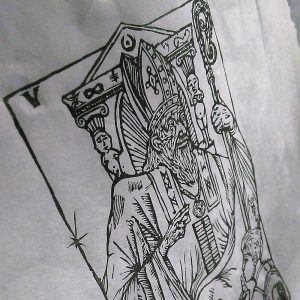 My goal is to create a traditional serie of trumps which also integrates a modern vision of tarot, which also connects to the various fields of modern esoterism, and which is also filled with genuine old school and modern magic. 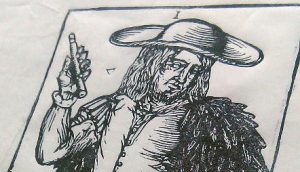 The number of prints won’t be limited, although as with my previous deck which ended at 32 copies, the handmaking process naturally limits the serie, and the decks will be numbered anyway. 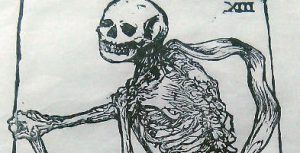